David K. Bennett (Dave to his friends) has been a serious reader of science fiction and fantasy since he was very young. He is actually old enough to have watched the original series Star Trek, though when they shifted program to air at 10PM on Friday nights, it was very hard for a small boy to stay awake through some episodes.

He started reading young and was introduced to Ray Bradbury in 3rd grade, and has never looked back, reading nearly every SF volume in his Junior High library. For years he toyed with the idea of writing rather than just reading, but it wasn't until the year 2000 when he got serious about writing down the stories in his head.

In addition to reading, Dave has accumulated entirely too many hobbies, many of which go years between opportunities to engage in them. He tinkered with electronics from a very young age, which transitioned into a lifelong professional interest in computers while in high school. He got his first programming job while still in high school writing firmware code for network monitoring devices that ran on CPUs that ran at a paltry 3/4 of a megahertz.

Dave did a lot of camping and hiking as a youth, and spent two summers as a councilor at a summer camp near Santa Cruz overseeing both the archery program and ham radio program. He has been training as a martial artist since his early twenties, and continues as an instructor and practitioner to this day. It may be that all these varied interests account for his less than speedy progress as a writer. Deciding to forego the traditional publishing route has added a whole new range of necessary skills to his toolkit. 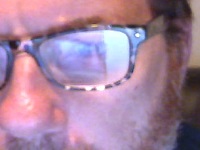